What are NFTs and How Does NFT Work? 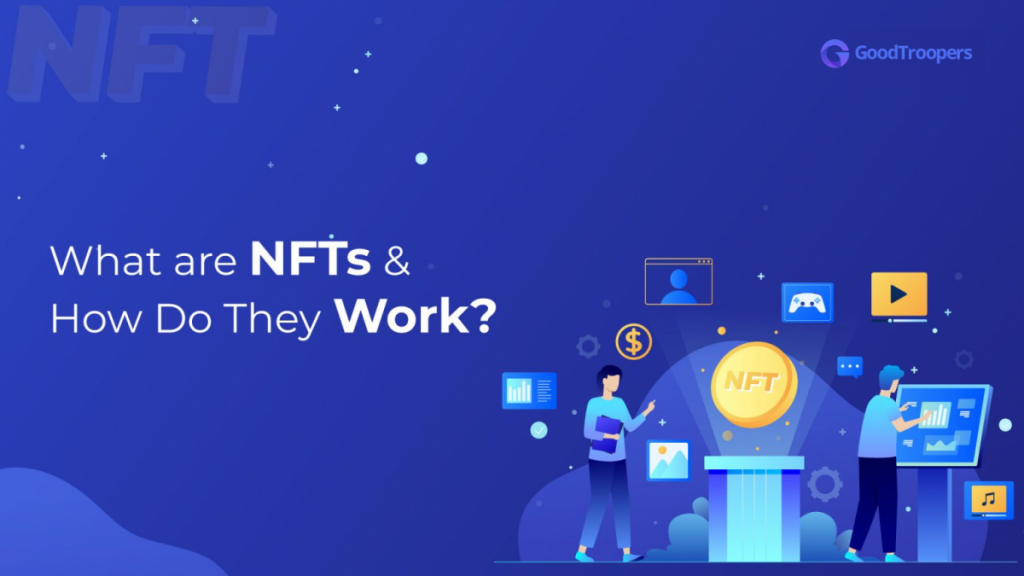 Being technologically advanced and hyper-social digitally nowadays, we share a variety of memes, infographics, jokes, artwork, and other digital assets with our colleagues, kin, and kiths for entertainment, information, or to inform the public about any event.

But have you ever wondered who the creators of these assets are or where these digital assets actually come from?

Well, the answer to these debriefs lies in a single modern terminology — non-fungible tokens.

It all started in 2017 when American studio Larva Lab launched the first intangible tokens called Crypto Punks on the  Ethereum blockchain. Back then, it was a  team of two individuals — including John Watkinson and Matt Hall.

Then in the very same year, another project called Crypto Kitties was launched and went viral right after launch. It is said to have raised a whopping $12.5 million in investment.

In this article, we will discuss what non-fungible tokens are, what NFTs are, and everything else you need to know about them.

These Non-Fungible Tokens, also known as NFT, is a digital asset or a type of digital certificate that showcases your ownership of certain goods, or assets, including both intangible & tangible items such as paintings, virtual real estate, postcards, videos, etc.

The key reason what makes NFTs so successful + popular is that — each NFT is unique on its own and cannot be duplicated or identified as a similar asset. To help you understand, let’s take a game ticket as an example. If you give someone a football game ticket, they will of course take a football game ticket. Right? And if that someone returned you a movie ticket, would you accept it?

The answer is no because movie tickets don’t have the same value as football tickets. If you use this example instead of NFT, you cannot exchange or redeem your game ticket (NFT) for a ticket because every football ticket has a unique identifier.

The same goes for NFTs. Since each token is different and has its own uniqueness and rarity — it is not possible to simply exchange or trade NFT tokens for tokens of the same value.

How Did NFTs Start?

There are several controversies surrounding the first appearance of the NFT. Coloured Coin is expected to be the first traditional NFT. A color coin is an image of a real asset on the blockchain.

In fact, the references to the color coin came in early 2012 in Yoni Assia’s blog post “Bitcoin 2.X (Color Bitcoin) – Early Features”. Colored coins are said to have supported experimentation and laid the foundation for NFTs.

After that, rare peps trading began on Ethereum, and the first-ever created NFT token called Crypto Punks was finally released. A company called Rare Bits has become a marketplace and portal for NFT exchanges, raising $6 million in investment. NFT’s ideology enabled the collectible card game now known as Gamedex, which initially raised over $800,000.

Currently, American digital artist Beeple has released a work called Every Day. “First 5000 Days” sold for $69 million (42329.453 ETH). It is one of the first works of art to be auctioned on the NFL’s most important auction house.

Additionally, as part of a recent deal, the NBA and Dapper Labs have announced that NBA TopShot Collectible and Tradable, have jointly released a beta version of their NFT app, they have been working on this since 2018 and launched in the first half of 2020. Collectibles include data and media tokens separated together in packages.

How Does NFT Work?

NFT is a unique cryptographic token managed on a blockchain. In this way, the blockchain acts as a distributed ledger that tracks the ownership and transaction history of each NFT with code, unique identifiers, and other metadata that other tokens cannot replicate.

How does the non-fungible token work? Below is the answer to this question.

The process of creating an NFT can be done through a shorthand blockchain with the right tools and support. Ethereum was one of the first widely used EOS, NEO, and now also includes the NFT standard.

Tokens can be used with smart contracts to add more detailed information such as the identity of the owner. This process gives NFTs scarcity and royalty properties, making them attractive when combined with digital media.

When we talk about scarcity, we mean that the owner determines the scarcity of an asset. For example, tickets for a sporting event or concert,  the owner decides how many tickets to sell. Similarly, in the NFT token market, authors can determine the number of replicas. Therefore, each of these replicas has some slight differences.

In another example of generating non-fungible tokens, the owner can only generate one NFT token, making it a special rare collectible. In any case, each  NFT will have a similar but uniquely unique ID, such as a barcode on a different fabric or ticket.

NFTs are encoded in software code (called smart contracts) that manages aspects such as ownership verification and NFT portability management. Additionally, NFTs are programmable outside the basics of ownership and transfer, like any software application, which includes many applications and functions (including linking NFTs to other digital assets).

For example, a smart contract can be created in such a way that some NFTs automatically allocate a portion of the amount paid for the sale of NFTs. In other words, you pay royalties to the original owner.

When someone creates an NFT, the NFT constructs a smart contract code that manages the nature of the non-fungible tokens that are added to the managed blockchain. Numerous blockchains, including Ethereum (ERC721 and ERC1155 smart contract principles are established), Flowchain, and Wax, can be used to process NFTs,  all using similar processes. In particular, certain NFT marketplaces work with specific blockchains, so choosing which blockchain to use for NFT can have a real impact on sellers if the right decision is not made. 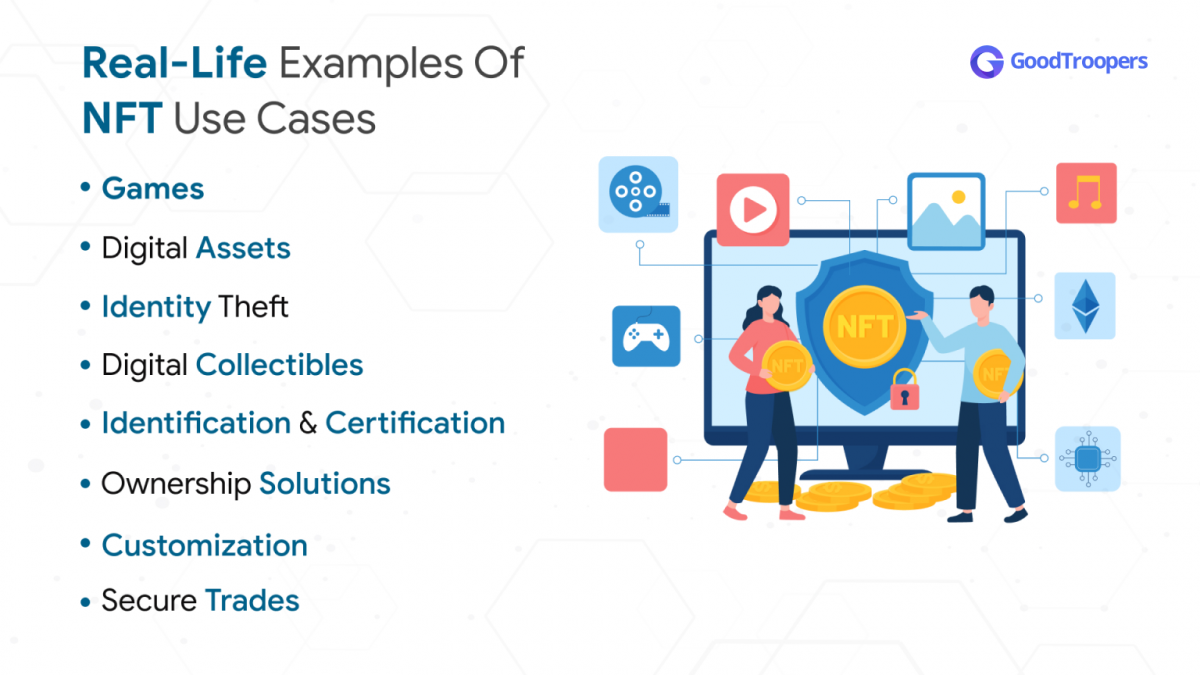 Real-Life Examples Of NFT Use Cases

Most games have virtual currency in the ecosystem to help users progress faster. At the same time, accounts with numerous purchases are in great demand in an ever-expanding unregulated market. The various use cases of NFTs allow players to easily trade in-game collectibles with proper validation and security.

For digital assets such as home plans, layouts, themes, and domains, NFTs are definitely ideal. Besides, digital real estate is gaining popularity these days in games like Decennial Lands. This allows the player to acquire and develop a set of spaces in the virtual world. Adding an NFT allows you to trace back the original author to these items.

Identity theft can be prevented by using NFTs on objects that can represent and digitize an individual, such as medical records and educational background. It also shows the importance of the help of non-fungible tokens due to the fact that digital artists can use them to transform works of art and establish unique copyrights. It also helps to distinguish the original from the counterfeit.

It is not surprising that NFTs are rare and primarily used in collectibles and art. Adding this token makes it easy to verify the authenticity and ownership of a collectible or artwork. It can also prevent artists from abusing or piracy of their work. NFTs are already starting to be used on cards and merchandise.

The NFT contains a unique set of information about a programmed asset or product. This makes it an ideal choice for issuing certificates, identities, entitlements, and licenses. IDs or certificates are issued directly through the blockchain with NFTs so that their origin can be traced back.

When the concept of NFT is clear, we can clearly see the benefits of blockchain smart contracts that are becoming a powerful force for change.

The advantage of immutable tokens is that they can be used to solve anomalies in both the digital world and the real world. While this was used to collect and play in the digital world (showing a particular CryptoKitty or someone claiming an item),  it could also be applied to items unique to the real world, such as houses, cars, crafts, or even individuals.

It can also be used to grant specific access or to grant access to Airbnb for specific cases or tickets. The

Additional information can be assigned to a  token, which can include standard parameters such as name and ownership, but can be extended to areas such as token history and related data.

]The importance of non-fungible tokens, in general, can be seen in the fact that transfers of ownership of physical or digital items are fraudulent and difficult to execute, or sometimes not allowed at all.

Due to the security of the blockchain and the uniqueness of non-financial tokens, any exchange handled as a token will be a much less complex and efficient process.

As a token, it can actually transfer ownership of items between platforms or allow the ability to interact with various services such as games or NFT marketplaces.

How To Actually Create An NFT?

The first thing a person needs to do to set up an NFT for sale is to create a “Crypto Wallet”. Your purchased Ethereum is going to be stored here and for that, you have to pay a mining fee as well. Then you need to connect your crypto wallet to one of the NFT marketplaces.

The NFT Marketplace allows designers and artists like you to upload your digital artwork or other digital assets and list them for sale online with NFT. You can think of it as eBay or Etsy, except that it’s only for NFT! The most popular are Rarible, OpenSea, Mintable, KnownOrigin, and SuperRare.

One thing to remember when uploading a digital asset or artwork is the amount you will provide. You can choose one of them. This means that only one artwork exists and is sold, or you can choose to download an art collection that contains multiple copies.

As with traditional art, this is a pretty big decision, as the number of original editions and the rarity of a piece of art directly affect the value of the piece.

By now, you may have guessed that we are still in the early stages of development. Therefore, it is easy to expect that many advanced NFT-based platforms will emerge over the next few years.

Talking about the present, this is the transition from Crypto Kitties and games to the use of digital IDs, painting, and other non-fungible tokens. This means the market is still raw in terms of experimentation.

For aspiring entrepreneurs, this represents a sea of ​​opportunities to enter and manage the space of the blockchain development services sector. We’re here to help. Share your NFT project ideas with us.

Q- Are there any government regulations for NFTs?

A. Because the government has only recently focused on NFTs, there is currently no law or regulation in place that governs or regulates their transactions.

Q. What are some of the famous existing NFT marketplaces?

A. OpenSea, Axie Marketplace, Larva Labs are some of the famous NFT marketplaces.

Q. What are NFT communities?

A. NFT communities are made up of like-minded individuals from all over the internet. These organizations spread the value of non-fungible tokens in their various forms. 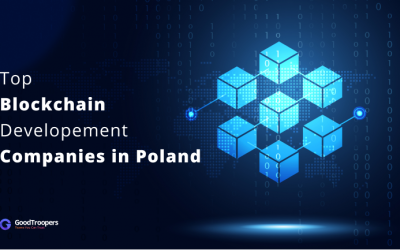 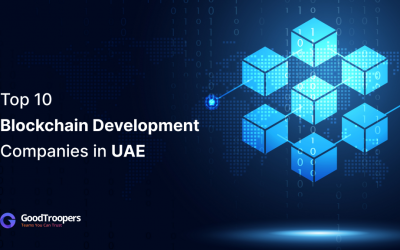 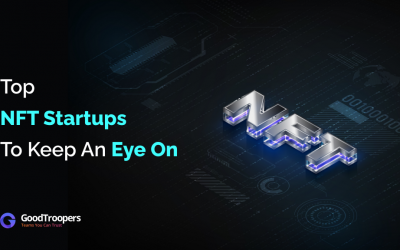 Best NFT Startups And Apps To Look Forward To