Due to the Rise of Metaverse and Web 3.0, the market for augmented and virtual reality will grow to more than eight times its current size, Over the next five years, making it the fastest-growing category among new technology, which also includes wearables and smart home devices.

According to a new analysis from technology market research firm IDC, augmented and virtual reality will be $36.11 billion in 2025, reflecting a 68.4 percent compound annual growth rate (CAGR).

This makes introducing AR/VR Products critical to your company’s success in the future.

Following in the footsteps of London and Berlin, Amsterdam has emerged as the go-to destination for tech entrepreneurs and talent.

How Amsterdam Is Becoming The Dutch Tech Hub?

Still, finding a reputable Development company in the Netherlands that specializes in AR/VR Development can be a daunting task, given the sheer number of options available.

So experts at Goodtroopers have compiled a list of the most ‘Trusted’ and ‘Top Ranking’ AR/VR App Development Companies based in the Netherlands. 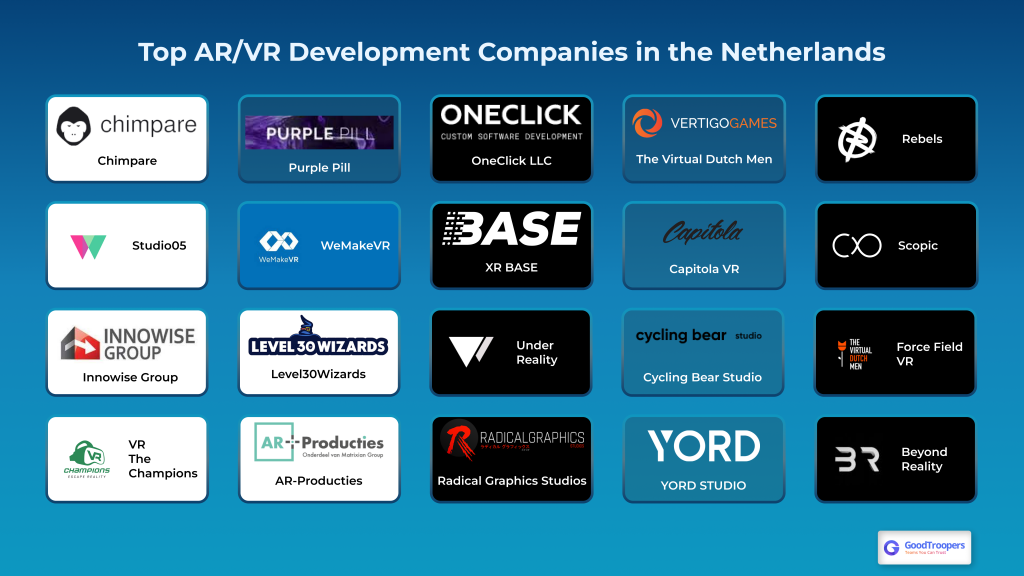 Top AR/VR Development Companies in the Netherlands in 2022

Working with a passion for learning about and delighting brands all across the world., they assist clients in navigating the digital world and embracing new technologies that provide them with a competitive edge. They are committed to delivering results and making a difference for the clients.

We’re entering a new era, the web 3.0 era. A world where marketing, sales, and eCommerce are revolutionized. A universe in which creativity, software, data, blockchain, and artificial intelligence coexist. Under Reality assists clients in navigating the world and embracing emerging technologies that provide them with a competitive edge.

The Innowise Group is a full-cycle software development firm with significant delivery centers in Europe and offices around the world. Their team consists of more than 1000 top-tier IT specialists who use their software engineering knowledge to help customers’ organizations become more inventive and successful.

They specialize in the most difficult interactive projects, creating high-end immersive experiences and creating their own goods.

They assist brands in making a positive effect by creating magical digital experiences. They do this by digging deep into your story, customer, and problems in order to design personalized digital solutions that perform, astound and stand out.

They will help you build a great digital product to help you with your business starting with a free consultation, technical audit, or discussion of options.

Rebels were formed in 2019 with the goal of making sophisticated IT information accessible to everyone, anywhere. By utilizing the most up-to-date techniques and technology, they hope to assist in resolving complicated issues, the optimization of the company and smoothing out production processes.

On every project, they have a team of young, talented, and dedicated IT specialists, developers, Agile experts, and designers who collaborate as a cross-functional team.

Cycling Bear is a studio that creates video games. They can assist you in developing any form of game from the ground up, including mobile, PC, casual, arcade, NFT games, VR/AR, and more.

Over 80 Augmented Reality and Virtual Reality applications were produced by their creative studio. For huge firms that want to take their workflow efficiency to the next level, they’re always inventing business solutions like VR E-learning and AR tools.

The team is made up of seasoned game developers, and thanks to their diverse skill sets, the end-user will always have the greatest possible experience.

They developed a ground-breaking camera system that allows the creation of genuine immersive 3D films for virtual reality. From now on, you can go wherever you want, whenever you want.

CapitolaVR is a VR, AR, and MR design and development studio situated in Amsterdam. Its mission is to produce highly immersive experiences for a wide range of applications.

They are a leader in VR, AR, and MR experiences, apps, and tools concept, design, and development. Their team of 25 designers and developers is constantly investigating the boundaries and challenges of Virtual Reality and Mixed Reality, from narrative to simulations.

Force Field is one of the world’s largest development studios dedicated completely to generating cutting-edge virtual reality and augmented reality experiences, as well as high-end games, original TV and video content, unique interactive experiences, and game-changing applications. It has now been acquired by Vertigo Studios for an undisclosed amount.

Purple Pill is an Amsterdam-based immersive content agency. Purple Pill created 360 3D films from start to finish, including distribution to a variety of virtual reality devices.

Despite its focus on cinematic virtual reality, the business also works on complicated immersive 3D, web, and VR or AR applications.

They design and build innovative immersive experiences as a creative agency, with a particular focus on sustainability and social and cultural impact.

Scopic is a virtual reality studio situated in Amsterdam that specializes in high-end 360° video and CGI creations.

Using a variety of methodologies and distribution channels, AR-Producties has been able to build a variety of interactive Augmented Reality and Mixed Reality projects for clients both at home and abroad.

The Virtual Dutch Men’s origins can be traced back to twenty years when they began with the 3D representation of real estate assets.

They breathe life into projects and objects, making them tangible and allowing them to speak to the imagination.

Studio05 is a creative production studio with more than ten years of experience working for a diverse range of multinational agencies and brands. They integrate thoughts into rich story-driven content by working directly with their customers and have a devoted team of directors, artists, and developers.

Design and strategy for immersive content such as augmented and virtual reality, experiences, and 3D content are among their strengths.

VR The Champions aspires to enrich the virtual world by creating high-quality 360-degree film and virtual reality content for businesses in every industry.

Their goal is to build a virtual reality experience that can be enjoyed on any computer, smartphone, tablet, or virtual reality headsets such as the Oculus Rift, Samsung Gear VR, or Google Cardboard. 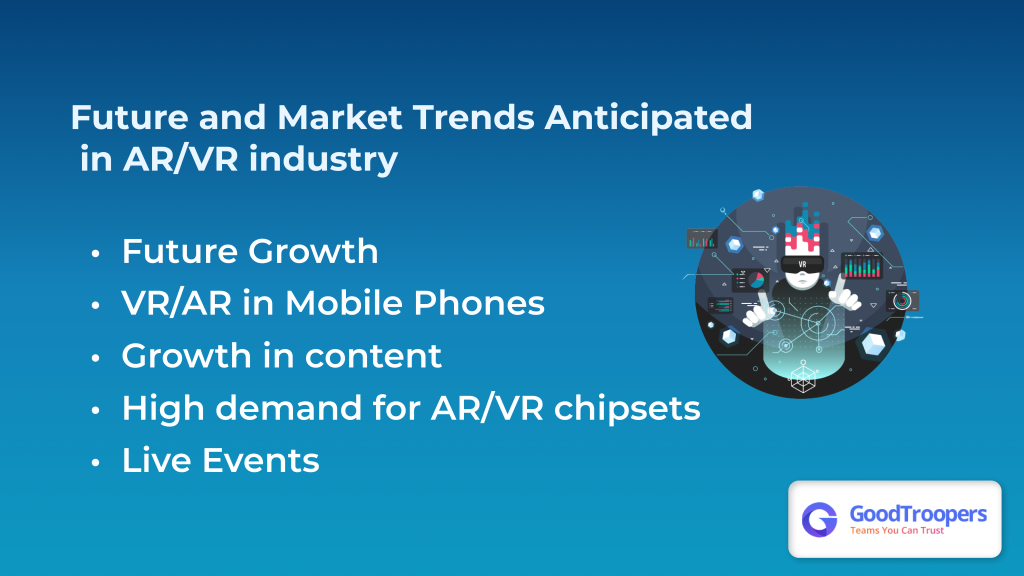 Comparison Of The Best AR/VR Developers In the Netherlands

AR/VR is a complex technology and it is important to carefully choose the most suitable and experienced developer for your project. This comparison may help you analyze the best and find the best fit for your project.

The Benefit of AR/VR Development-

Investor Outlook- According to IDC, a $4.1 billion investment in AR/VR/MR training is expected.

Goodtroopers compiled the list after conducting extensive research and a rigorous selection process, which included taking into account the missions and policies of AR/VR App Development companies based in the Netherlands, services and specialties, pricing model and location, Google ranking, user ratings, and other factors. Selecting the ideal firm for your project will be a lot easier and more time-effective when combined with our vetting procedure.

The companies at the top of the list aren’t always the best. Finally, we recommend that you research your options before making a final decision to eliminate any remaining concerns. GoodTroopers can help you choose the AR/VR Developers according to the needs of your projects with our best-in-class database of the top IT Services Companies.

Q1- What is Augmented Reality and Virtual Reality?

Ans- Augmented Reality- Augmented reality (AR) is a technologically augmented version of the real world that is created by the use of digital visual elements, music, or other sensory stimulation. It’s an increasing trend among businesses that deal with mobile computing and commercial apps.
Virtual Reality- Virtual reality is a software-created artificial world that is presented to the user in such a way that the user suspends disbelief and accepts it as genuine. Virtual reality is mostly experienced on a computer using two of the five senses: sight and sound. A 3-D image is the most basic kind of virtual reality.

Q2- Which are the Top Companies in AR/VR Industry?

Q3- What is the Average cost and hours required in AR/VR-based App development in the Netherlands?

Ans- The Average cost and hours required in AR/VR-based App development in the Netherlands are ( 50usd- 150usd) and 80-450 Hours respectively, depending on the Type of the Project and its complexity.

How to Create a Clone of Buywith – Live Streaming Shopping Platform 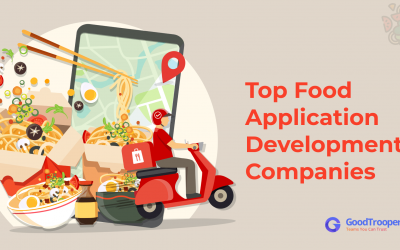